The Thetford-Strafford Community Solar array is designed to generate 230,000 kilowatt-hours of electricity during its first year, enough to power about 35 average Vermont homes.

It will also be the first solar farm in Vermont to serve a mix of customer sectors — a “hybrid” partnership between residential customers, a commercial farm, and the town of Thetford itself.

A commercial entity — Thetford-based Long Wind Farm — acts as the anchor, and purchased enough of the roughly 185 shares on offer to create a critical mass that allowed area residents to buy into the entity.

The shareholders who live in Thetford, Strafford, and Norwich expect to recoup their investment and then some through reduced electric bills — about 85 percent of the electricity produced at the site will be sold to Green Mountain Power through the state’s net-metering program, which guarantees customers a minimum rate for feeding solar energy back into the grid.

The site was designed to accommodate the abundant wildlife in the location and the unique terrain, with no fences to impede longstanding animal pathways. 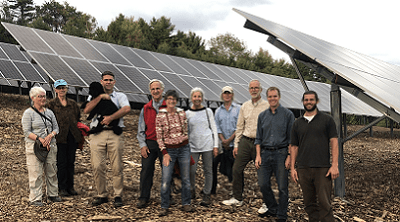