While Solar Jobs Up Nationwide & In 31 States

Counter this national trend, solar jobs within Vermont declined for the third year in a row. Vermont’s solar sector directly employed 1,186 people full time in 2019, a loss of 581 jobs – a 33% decline since 2016.

“Nearly 1,200 families are supported by a full-time Vermont solar job. Local solar workers help Vermonters cut their energy bills, do their part on climate, and help their neighbors access renewable energy,” said Olivia Campbell Andersen, Executive Director of Renewable Energy Vermont. “These local, small businesses are helping build stronger communities now. Given plenty of volatility out of Washington, we need to make sure Vermont’s policies keep us on track towards our climate and renewable energy commitments.”

The Vermont Solar Pathways study, supported by U.S. Department of Energy, found that if Vermont generated just 20% of our electricity from solar, we would create $8 billion in net benefits for Vermonters. According to analysis by the Vermont Department of Public Service, about 87% of businesses in the clean energy sector are small business, with fewer than 24 employees, meaning these job loss numbers have a tremendous effect on Vermont communities and represent a significant loss in economic potential. The Solar Pathways Report also demonstrated that it is still possible for Vermont to achieve of 20% solar by 2025, but our state is currently off track. 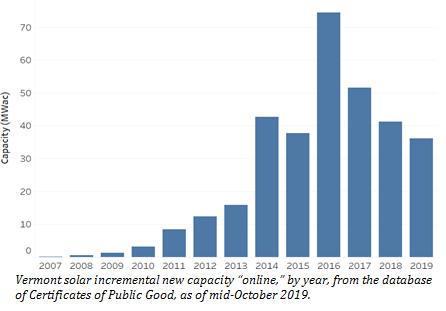 Unfortunately, the news of both the decrease in installed solar capacity and loss of jobs does not come as news to solar installers who warned of these consequences during the reconfiguration of net metering rules. Net metering allows Vermonters to generate their own electricity and share any excess renewable electricity to the grid to for their neighbors to use.  Community solar projects which enable those who cannot host solar onsite due to renting, historic roofs, or shading are no longer feasible under the new rules.

The Solar Foundation, a nonprofit educational and research organization, issues the National Solar Jobs Census each year to provide comprehensive and reliable data on the U.S. solar workforce. Since the first Solar Jobs Census was published, American solar jobs have increased 167%, from just over 93,000 jobs in 2010 to 249,983 jobs in 2019. In the five-year period between 2014 and 2019, solar employment increased 44%, five times faster than job growth in the overall U.S. economy. This job growth reflects the rapid expansion of the U.S. solar sector, driven by the plummeting cost of solar technologies and its increased popularity among individuals, businesses, and electric utilities.

“The solar industry has been one of America’s leading job creators over the past decade, as evidenced by our annual National Solar Jobs Census,” said Andrea Luecke, President and Executive Director of The Solar Foundation. “In just ten years, despite facing many challenges, solar has grown from a niche product to a mainstream energy source that provides a quarter of a million high-quality jobs. This is great news, but it’s only a fraction of what can be accomplished if we are truly committed to solving the climate crisis and expanding the use of solar and storage. It’s past time for us to unite as a nation and create even more jobs by harnessing the power of the sun.”

“Under Governor Cuomo’s unmatched leadership on climate action, solar has become an increasingly cost-competitive resource in New York’s pursuit of 100 percent clean electricity, with 2019 as our most productive year ever for solar installations,” said New York State Energy Research and Development Authority President and CEO Alicia Barton. “As New York maintains its status as one of the fastest growing solar markets in the nation, we expect our progress to continue to be an economic catalyst for growing solar investment and jobs across the state.”

The National Solar Jobs Census is based on a rigorous survey of solar establishments conducted between October and November 2019. The date collection effort included approximately 66,900 phone calls and over 47,000 emails. The full report can be found at SolarJobsCensus.org.

About The Solar Foundation®

The Solar Foundation® is a national 501(c)(3) nonprofit organization whose mission is to accelerate adoption of the world’s most abundant energy source.  Using the same rigorous, peer-reviewed methodology, The Solar Foundation has conducted an annual Census in each of the past 10 years to analyze trends and track changes over time. Learn more at TheSolarFoundation.org.