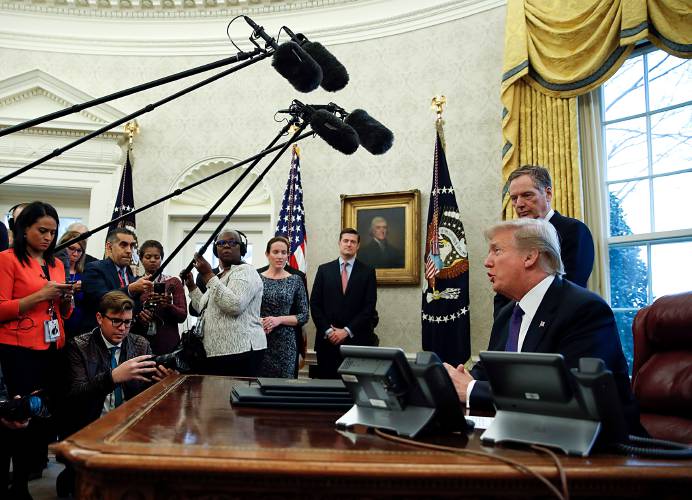 White River Junction — President Donald Trump’s decision to move forward with a steep tariff on solar panels could spell particular trouble for Vermont, which has one of the most solar-dependent economies in the nation.

On Monday, the Trump administration announced that it would follow a recommendation from the U.S. International Trade Commission and impose a 30 percent tariff on imported solar modules and solar cells. The rate will decline before phasing out after four years.

The move is targeted at China, which the trade commission found has cornered more than 70 percent of the world market in solar modules, primarily because the Chinese government has heavily subsidized its solar manufacturing industry.

Between 2012 and 2016, those low-cost solar panels have flooded the U.S. market, which brought solar into financial reach for millions of Americans, but also drove local producers out of business, according to a fact sheet released by the Trump administration in conjunction with the announcement.“Most U.S. producers ceased domestic production, moved their facilities to other countries, or declared bankruptcy,” according to the fact sheet.

But during that same time period, Vermont’s solar industry has exploded by capitalizing on the need to install lower-cost solar panels from China for residential and commercial customers.

By 2016, 19,000 Vermonters — one in 16 workers — were employed in the clean energy economy, which now includes more than 80 solar companies and has grown at a rate that significantly outpaces the state economy as a whole.

The tariffs were sought last year by Suniva Inc., which filed for bankruptcy protection in April, and the U.S. subsidiary of Germany’s SolarWorld.

The administration also announced a tariff on large washing machines that was sought by Michigan-based Whirlpool Inc.

However, the Solar Energy Industries Association, which represents installation companies, said billions of dollars of solar investment will be delayed or canceled, leading to the loss of 23,000 jobs this year.

Solar companies in the Upper Valley are anxiously awaiting the actual impact of the tariff, and trying to calculate how much it might increase costs for their customers, said Jim Merriam, president of Norwich Solar Technologies, which has a workforce of 35 and installs solar arrays.

“We’ve done some hedging, and have paid in advance … on projects in the short term to make sure there’s no disruption,” Merriam said. “All the projects in the near term” — like an array on RSD Trucking in Hartford that will provide energy to the town of Woodstock” — “are all good.” READ MORE